Meet Me At The Muny 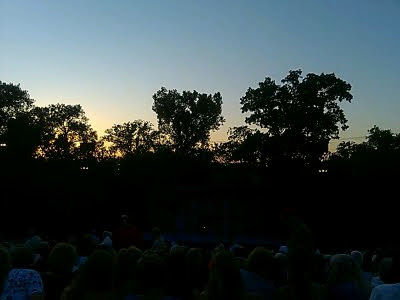 I've been going to the Muny for years.

(Non-STL reader disclaimer: The Muny is an outdoor amphitheater - the oldest and largest in the U.S. - that was built in Forest Park for the 1904 World's Fair and plays hosts to musicals every summer. They aren't travelling tours of the shows though, they are all produced right here in the city. Watching the sunset behind the stage before showtime - like this picture- is the best.)

It started off with random shows when I was a kid. In middle school, my Mom, Sister and I started a tradition of getting Mom's Deli and sitting in the free seats in the back. And then, Mom bucked up and started getting season tickets every year.

Blame it on my love of musicals or my dance background or that theater criticism class I took in college, but my sister and I always spent the car ride home dissecting the show we just saw. The costumes. The acting. The singing. The set. And usually most of all, the dance numbers.

Now that Kristin is in DC and my Mom drives home to South County after the show, I've got no one to rant (or rave) with. People ask me how the show was and I know damn well they are looking for a good/bad response, not my answer of how it compares with past shows or why that actor wasn't right for the part.

Good thing I have a blog, eh? We're already three shows in this season, so here goes:

Legally Blonde:
Let's get this straight. I'm not a big fan of the 'modern musical.' The kind where they sing pretty much all the dialogue. The kind where the music sounds more like a pop record than a stage production. I'm just not a fan.

LB is that kind of musical.

That being said, it was funny, enjoyable, but didn't blow me away. The set design was lackluster (maybe because it was all pink?). There wasn't enough of the cute dog(s). Most of all, I didn't think it was appropriate as an opening production. LB is a bit, well, adult. I get that they wanted a big blockbuster musical to open with, but I would have saved this for mid season where they usually put the big kid shows (you know - the Miss Saigon's, the Hairsprays. Maybe it was complicated because they are also showing Little Shop of Horrors this year?).

Kiss Me Kate:
There's nothing much to say. It isn't The Muny's fault - this show was just bad. Plays within a play are always annoying, but this takes the cake. I love you, Cole Porter, but no.

Little Mermaid:
Every year, the Muny hosts a big, family friendly show to run for two weeks. Of course, Mermaid was that show (in its first off Broadway production!).

I was worried this would look like the shows I've seen at Disney..... a girl dressed as a mermaid sitting on a rock the whole time, being pushed around the stage (read: lame), but it wasn't. Everyone walked around - Flounder, Ariel, the mermaids (and mermen), Ursula, Sebastian. That whole 'suspension of belief' thing really came into play here. I have a feeling if you had never seen Disney's animated Mermaid, you would have no idea what these brightly colored creatures were supposed to be.

Casting gets an 'A.' Anything with Ken Page and Francis Jue usually gets high marks from me, but adding Paul Vogt as Ursula?! Yes, please. And that little girl as Flounder (and her real life Dad as Scuttle)? Well done. But the real star was the set design. It was gorgeous. Big. Creative. Colorful. Exactly what productions like this call for. (Maybe they took some of Legally Blonde's budget....)

That's it. So far. Coming up next (one of my favorites) - Singin' in the Rain!
Posted by Danielle
Email ThisBlogThis!Share to TwitterShare to FacebookShare to Pinterest
Labels: fish fry, movies, muny, music, rant, STL

THANK YOU! (I need some dance reviews though... could any of them actually dance?!)