I know that doesn't seem like a big deal, but it is. My 'cooking' usually consists of one of those 10-minute pasta packs or steam-in-the-microwave veggies. Okay, technically I still used frozen broccoli last night, but let's just focus on the hummus and spinach stuffed chicken I made.... 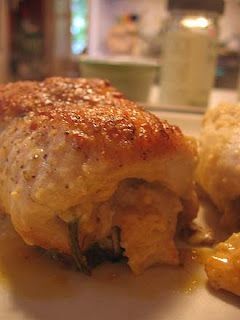 Here's the recipe (I found it here):


Pound the chicken breast to thin it out (Careful, chicken is slippery. I did not know this). I just layered mine between two ziploc baggies because I didn't have plastic wrap (and yes, I am aware it would have been easier to put it inside the bag). Meanwhile, heat a skillet over medium-high heat and add the oil.

Smear some hummus on each flattened piece of chicken. Follow up with the spinach leaves, spice blend and some parmesan cheese.

Now roll it up. Sprinkle each chicken roll-up with some salt, pepper, spices and some Parmesan cheese. My tip? Season the side where the fold is... You'll see why in a minute.

Add the chicken to the skillet, seasoned and parmed side down. Here's where seasoning the side with the fold comes in handy! When I did it, I seasoned the other side, so when I set it on the pan it immediately came unfolded and got really messy. If you put the folded side down first, to should cook close... if that makes sense. Anyway, go ahead and season the side facing up and let it brown for a couple of minutes.

Flip it over and brown the second side. Add the orange juice and broth to the pan and reduce the heat to medium. Cover partially and let cook until the chicken is done.

Remove the chicken and drizzle some of the sauce on top to fancy it up.

Nom, nom, nom. That picture isn't mine... I borrowed it from the website where I got the recipe. But mine was actaully pretty good! I impressed myself.
Posted by Danielle
Email ThisBlogThis!Share to TwitterShare to FacebookShare to Pinterest
Labels: grub