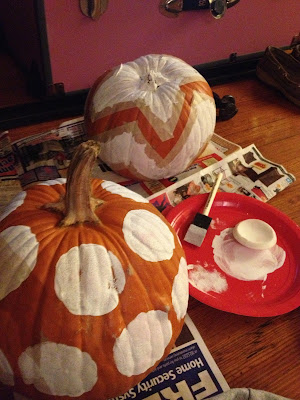 This is the simple, non-crafty alternative to actually carving pumpkins... because I suck at that. Painting pumpkins requires very limited supplies and it means you don't have to gut them - because, let's face it, that's a pain in the ass. (Although, I did see a neat trick on Conan last night to suck the guts out with a vacuum. Genius!)

I did two pumpkins - one in polka dots and one in chevron. You'll need -


For the chevron pumpkin, just tape a zigzag pattern around the whole pumpkin making it as thin or thick as you like. I started with the middle line, and then decided to paint the whole top white too. I like the way it looks with the stem painted.

The nice thing about the acryllic paint is that it dries pretty quickly. I did two coats of the white and let it sit overnight. Then, I peeled the tape off. Be careful though! Pulling it off too quickly may rip some paint off with it.

For the polka dot pumpkin, I dipped a round makeup sponge in paint and just started stamping away starting at the top row. Be conscious of how you're spacing your dots so that it evens out as you make your way around the pumpkin. (I guess I could have measured or something... but that takes way too much work.)

Make sure you press each dot down gently enough that it doesn't just smear, but hard enough to make an imprint - think of it like applying an instant tattoo! 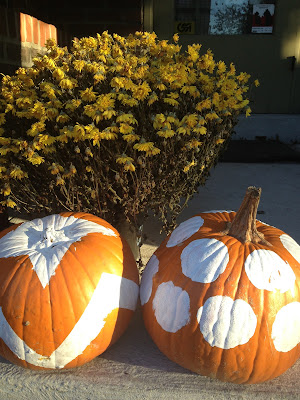 Place on the front porch with some fall flowers and bam! domestic goddess.
Posted by Danielle
Email ThisBlogThis!Share to TwitterShare to FacebookShare to Pinterest
Labels: design, DIY, holiday